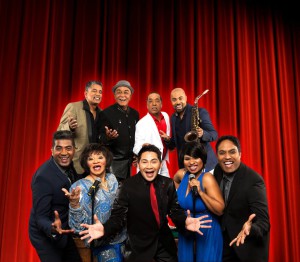 This summer the Mother City is going to rock as Alistair Izobell and the Baxter Theatre Centre pay tribute to the iconic Luxurama Theatre, one of Cape Town’s grand old dames of cinema and entertainment, with a brand new show Remembering the Lux, from 03 December 2015 to 09 January 2016.

Written and directed by Izobell and Baxter CEO and artistic director Lara Foot, Remembering the Lux is set to be the undisputed highlight of the festive season. They have teamed up to bring to life and celebrate its history through stories and classic hit songs in this first-ever homage to the legendary Luxurama.

Izobell has assembled a stellar ensemble featuring himself, Terry Fortune, Terry Hector, Loukmaan Adams, Niesha Abrahams, Leslie Kleinsmith, Giempie Vardien, Nur Abrahams and Felicity Keran, accompanied by a 5-piece live band. Most of them have, at some point in their own careers, performed at The Lux (as it was and still is referred to today).

The cast will share anecdotes as they sing familiar and perennially popular songs, such as Where the Boys Are, Il Mondo, Spanish Eyes, Stay Beside Me, Puppy Love, My Life and Delilah, to mention just a few – guaranteed to get audiences singing along and dancing in their seats.
Many top international artists, such as Connie Francis, Dusty Springfield, Engelbert Humperdink, Tom Jones, Percy Sledge, Peaches and Herb, Petula Clark, Jose Feliciano, Dobie Gray, Lovelace Watkins and many others, performed at the Lux. Local stars like Taliep Petersen, Zayn Adam, Jonathan Butler, Richard Jon Smith, Ricardo, Ronnie Joyce and Lionel Petersen are also just a few of the local music sensations who appeared on the boards. Well-known South African bands like The Rockets, The Bats and Rabbit and Ballyhoo were among the groups who battled it out.

Since it was built in 1963 by Ronnie Quibell, The Luxurama Theatre in Wynberg became a vital cultural hub for many integrated audiences and it preceded the Three Arts Complex in Diepriver, which was also established by the Quibell Brothers. It was apparently the first theatre complex to host mixed audiences during apartheid.

This is a first-time collaboration between Alistair Izobell and Lara Foot, both accomplished and respected artists in their respective genres. Izobell is one of South Africa’s foremost artists, producer and musical directors, having started his career at the age of seven, and later went on to perform in David Kramer and Taliep Petersen’s Kat and the Kings, which earned him and the cast the Laurence Olivier Best Actor in a Musical award. He was also nominated for a Drama Desk Award for Outstanding Featured Actor in a Musical. He has become one of the leading music figures in the Western Cape, and in recent years, he has wowed audiences with productions such as Kaapse Jol, Kaapse Musiek in Colour 2, Kaapse Stoep Stories and Just Me – Net So.

Foot has received numerous awards and accolades for her work, which include Tshepang, Karoo Moose, Solomon and Marion, Scrooge and Fishers of Hope (Tawaret).

The Baxter Theatre Centre has launched a special Facebook page called The Lux which members of the public are encouraged to join and share their own memories, pictures and stories about this once statuesque and vibrant entertainment centre.

“I am personally so excited to be honouring The Luxurama Theatre, home to so many of this city’s audiences during it’s heyday”, says Izobell. “Almost the entire cast in this production have performed on that stage and for all of us, to bring back those memories for so many people, I regard as a blessing. Teaming up with Lara, who had tremendous success with her production of Scrooge a few years ago, is another highlight of my career so far. We would like to invite local audiences to join us in this festive season celebration as we pay tribute to the Lux and share their memories and stories with us on the Facebook page.”

Remembering the Lux runs from 03 December 2015 to 09 January 2016 and booking is now open at Computicket on 0861 915 8000, online at www.computicket or at any Shoprite Checkers outlet.
For discounted corporate or group block bookings, fundraisers or charities contact Sharon Ward on 021 680 3962 or email sharon.ward@uct.ac.za or Carmen Kearns on 021 680 3993 or email her at carmen.kearns@uct.ac.za.